D is for Diagnosis

Getting diagnosed as autistic can be extremely positive for many. The process can be long, hard and slow, but once the point of formal diagnosis is reached, it can be a massive relief. And this is why I am marking "diagnosis" as autism-positive and as part of acceptance.

For parents of children, getting a formal diagnosis can be a tumult of emotions, some positive and some negative. From the various autistics-and-families groups I'm in on Facebook, the positives of having a diagnosis tend to centre around having confirmation and validation of their child's neurology and difficulties, knowledge that they have not been bad parents and access to supports (potentially - it can often be a bit of a postcode lottery!) that can only be obtained with formal diagnosis, such as equipment, support in school and so on. Additionally, it can help them understand their child better (depending on where they look, what they read, etc).

For people like me, who grew up not knowing they were autistic, diagnosis again can cause a mix of good and bad emotions. I've noticed, though, that feelings tend to be overwhelmingly positive, especially for those who have been trying for a long time to get a diagnosis. I spent several years in the self-diagnosed camp because trying to get an assessment as an adult in the UK is difficult; in 2009-10 there was nothing in my parents' area of Essex (I am not an Essex girl; I was born in Hertfordshire but raised by a Lancashire woman so I am firmly a Lancashire lass) for assessing adults, and it wasn't until 2011 that an adult assessment service was set up in the Exeter area. For me, getting that formal diagnosis was 100% positive.

Upon receiving a formal diagnosis, the feelings I and many other adult-diagnosed autistics experienced were a combination of joy, relief and validation. Some do experience negative feelings, such as confusion, anger, frustration and fear - things like, "Why was I not picked up sooner as autistic?", "What does this mean for my future?", "Will it make my life more difficult?", "Will people reject me?" and "I don't want to be autistic" (partly because of the persistently and wholly negative portrayal of autism), to name some. These are perfectly valid responses, particularly in a world that tend to be hostile, overwhelming and confusing to autistics. This is why we need proper acceptance.

Knowing that your brain is not defective or broken, that it is simply wired differently, can be a massive relief. I was 23 or 24 when I self-diagnosed and 28 when I was formally diagnosed. When a friend suggested to me that I might be autistic, I looked into it and comprehension dawned, everything clicked into place and you know in cartoons when someone has an inspiration, a lightbulb lights up over their head? I could practically see that! For a long time I had genuinely believed my brain and myself to be broken, because I struggled socially, my bluntness was often perceived as rudeness, I was hypersensitive to everything, I was often considered weird and awkward, and things that came instinctively to others (eg. comforting a crying classmate) were very difficult and unnatural to me and were very intellectualised. Once I realised that there was nothing wrong with me, that everything could be explained, I was a lot kinder to myself. And that brings a real sense of peace and self-acceptance.

Once I knew I was autistic, I indulged my inner Hermione and read as much about autism as I could get my hands on! I wanted (and still want) to know everything about autism. And in reading things about it and interacting with other autistics, I came to understand myself so much better than I had previously done. And that's a massive self-esteem boost.

Validation is a powerful thing. I respect that some people do not want to seek a formal diagnosis and they have their reasons. It's something that is currently being researched at Exeter University in the Exploring Diagnosis project, for which I am an advisor on one of the PhD projects. If anyone in the UK is reading this, sought diagnosis as an adult or chose to remain solely self-diagnosed, and would be interested in participating as an interviewee, do let me know and I can put you in contact with the relevant people! For me, being only self-diagnosed was not enough - I found myself frequently questioning and doubting whether I was actually autistic, and wondering if it was mental-health problems masquerading as autistic signs (turns out the mental-health problems were largely a result of difficulties from not realising I was autistic!) In addition, I encountered a number of people who did not see self-diagnosis as valid and I got rather fed up of trying to justify myself to them. Getting a formal diagnosis, for me, silenced the doubters (including myself!) and, more importantly for me, confirmed and validated that my difficulties (and also things I have come to see as strengths) were real, that my experience of the world and how I processed it were true and not some figment of my vivid imagination, and that I was definitely autistic.

As well as this, when I lend my voice to campaigns such as Not Locked In (last year) and the ongoing Judge Rotenberg Center campaign with Cal Montgomery and Kieran Rose, having a formal diagnosis gives more weight to my voice than if I were only self-diagnosed, and means it is more likely (not guaranteed by any means, because people like to throw functioning labels around by claiming that I'm "too high-functioning" to advocate for "low-functioning" (their words, not mine) and the "Not Like My Child" card (of course I'm not like your child - they're 6 or whatever and I'm 33!)) that my voice will be listened to, because I am considered a "genuine" autistic. I wish that self-diagnosed autistics were afforded the same level of value as those of us who are formally diagnosed, but that is not currently the case.

Having that formal diagnosis has given me so much confidence to be authentically me. I don't hide my stimming, I'm open about not making eye contact and why, and it means that I don't hide my autism generally. When I go for job interviews (rare, because my physical disabilities significantly restrict how much I can do, and because I'm autistic certain environments are unworkable for me), I can inform them beforehand that because I am autistic, I will not be making eye contact due to the physical pain it causes me. I am autistic and proud to be so!

As I said in yesterday's post, C is for Community, getting that diagnosis has helped me feel more part of the autistic community than when I was only self-diagnosed, due to the validation and confidence explained above. And I've made some amazing friends there. I'll talk more about that later this month in S is for Social Media.

Being formally diagnosed can (not necessarily, as it depends on people and what's available in your local area) enable you to access to (appropriate) supports and accommodations that you may not be able to access without a formal diagnosis, such as support in education, assistive technology, therapists trained and/or specialising in working with autistics, and so on. Many places will only consider those with a formal diagnosis, possibly due to limited resources, the risk of doing harm with an unsuitable approach or for insurance purposes (more in the US than in the UK), for example. While such things are meant to be based on needs rather than diagnosis, having a formal diagnosis can make the process easier and quicker. Also, knowing that you are autistic can make it easier to determine particular techniques that work for us but not necessarily NTs and vice versa.

Diagnosis is today's word because for me, getting a formal diagnosis has been immensely positive and has enabled me to accept and be confident in my being autistic. 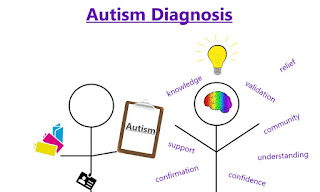