C is for Community

When you are part of a community, you feel welcome, accepted, that you belong.

There are many different types of community and you can belong to many simultaneously. I belong to the following communities: autism, autistic, Catholic, democratic-socialist, Harry Potter, folk, Deaf, roleplay, fanfiction, Exeter University, my local (geographical) community, disability, football (soccer for you non-Brits!) and probably a number of others!

Growing up not knowing I was autistic and that was the reason for my social exclusion and my sense of being different from those around me, I struggled to feel a sense of belonging. I felt that sense most strongly in things I chose to do or be involved in, such as the folk community as I grew up in that, and then as an adult I discovered others, such as the Deaf community; I did not so much feel part of the community at school as many of my classmates picked up on my difference and excluded me.

Once I realised that I was autistic, my perception of myself changed, and I began seeking out autistic groups on Facebook. And the sense of welcome and belonging was incredible! Last year, to mark 20 years of Harry Potter, I wrote a post about the parallels between that and discovering the autistic community, which you can find here.

Since then I have become very active in the autistic community, where I feel very welcome and included. I've made some amazing friends there, people I have not yet met in person (but hope to in future), some of whom I've been working hard with on various campaigns (the NotLockedIn one last year and currently the StopTheShock one to, at absolute minimum, get the Judge Rotenberg Center to stop using torturous electric-shock practices as behaviour control, the petition for which you can sign and share if you have yet to do so), and I have found and been able to contribute so much support.

Autism
In the context of autism, there are multiple communities: the autism community and the sub-group of the autistic community. Some people belong to one but not the other, and others belong to both.

It includes parents, siblings, children and other family members of autistics. Some of these people may choose not to engage with the autism world and thus may decline to be identified as part of the community.

Clinicians, such as psychologists, physiotherapists, occupational therapists and speech & language therapists (often abbreviated to SALTs here in the UK) who assess, diagnose and work with autistic children and adults, are part of the autism community.

Other members of the autism community include support workers, therapists (including counsellors, etc, because many autistics have mental health problems), teachers of autistics, autism researchers, those involved in the creation, design, development, manufacture and promotion of products that improve autistic lives (such as AAC), autism organisations and, miscellaneous allies, such as close friends, could potentially fall into this category.

All of these can be either beneficial or detrimental to autistics - ASAN (Autistic Self Advocacy Network) is a beneficial organisation, whereas Autism $peaks and TACA (Talk About Curing Autism) are firmly in the "detrimental" camp. It is not always easy to ascertain which an organisation is.

The image below is something I put together today to go with this post (may tweak positioning of words a little at some point so that it is more aesthetically pleasing, but it's 9:40pm and I want to get this post completed). It is not in-depth and is meant to be a general guide rather than necessarily an absolute. 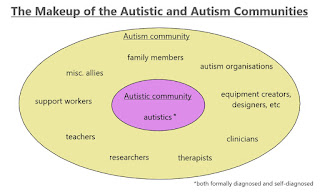