Autism Acceptance Month 2018 Day 2: A is for Acceptance

This one may be slightly rushed as I've not got that much time (and I only came up with the alphabet idea on Friday night so I haven't had the opportunity to give it as much attention as I'd like!) Also, I'd rather keep the April posts more concise and shorter reading; when I have more time to work on things once this month is over, I can go into more depth and detail. This will not be comprehensive (lack of time today) so I will be writing more on this later.

There are so many possibilities for this letter! But as autistics are working to reclaim April for ourselves, are relabelling it Autism Acceptance Month and are pushing for us to be accepted and not merely tolerated, the most important A-word this month for me is:

A is for Acceptance

Acceptance moves beyond this, being included as we are, and this is what we are asking for. But what does it mean?

Making adjustments that allow us to access places, events, etc on an equitable basis as NTs. This could include things like non-fluorescent lighting, quiet spaces, ensuring only one sound at a time is going on (there are many accommodations, some of which will vary from person to person; a more detailed post on this will go up at some point in the future).

Remember and respect that our ability to cope with the world fluctuates, and just because we managed/appeared to manage perfectly well with a situation on one day, that does not automatically mean we can always cope with it. Tiredness, stress, anxiety, pain and many other factors influence and reduce our coping abilities, so if we tell you that we can't do that thing, please don't say, "But you were fine with it last month! Don't use autism as an excuse!" and try to pressure us into doing it. Respect that if we say we can't do something on a given occasion, even when we've done it before, we mean that. But also don't assume that means "I can't/won't do it ever again" unless we specifically say that; please do invite us again! It simply means "I can't do it on this particular occasion."

Allowing all forms of communication as equally valid as speech - AAC (Alternative and Augmented Communication), FC (Facilitated Communication), typing, writing, drawing, sign language, Makaton, PECS. This means not forcing speech (some autistics have apraxia, where for various reasons they physically cannot speak) at the cost of other options; this means giving the autistic person access to as many communication options as possible from an early age, and allowing them to use whichever is easiest and most comfortable for them (note: not what is easiest/most comfortable for the parent, teacher, etc). Speech is not the be-all and end-all; just look at the devastating effect forcing speech has had on Deaf people since the 1880 Milan conference. It's 2018 and Deaf people are still paying the price for that. Most of the time I am capable of speaking; however, when I am tired, stressed, etc, I can't, so let me communicate via writing or BSL, and don't pressure me to speak when I can't.

Respecting how the autistic person's brain operates and working with that. You wouldn't force a Mac computer programme to run on Windows or Linux (well, you could try, but you wouldn't get very far). The Mac/PC analogy is an old, well-used one, but it's a pretty good one. If an autistic person works best in a quiet, dimly-lit corner with a divider between them and other people, don't force them into the middle of the room under fluorescent lights surrounded with people and lots of different noises with no dividers.

Using the autistic person's preferred identifying language. If they prefer person-first language ("person with autism"/"has autism"), then use that when interacting with them. If, like the vast majority of autistics, they prefer identity-first language ("is autistic"), use that and don't language-police them (especially if you are NT) by insisting on PFL. Generally, with autistic preferences, either default to IFL or use both. "Autistic" is not a bad word and don't be afraid to use it!

Do not attempt to suppress autistic behaviours like stimming. If the behaviour is harmful (either to the person or to others), then redirect and try to encourage more constructive behaviours - for example, when I have a meltdown, I tend to hit things and scream (I will write more about meltdowns another time), which has the potential to cause damage (primarily to myself - so many bruises and bite-marks over the years). It still happens sometimes. Usually I can feel it building and have enough time to get somewhere safer while I still have some control, so I can direct myself to something like the bed or sofa, which can absorb the impacts and won't cause damage (either to me or whatever I'm hitting). There is nothing harmful about hand-flapping, bouncing, etc unless there is an underlying condition or a circumstance in which it would cause harm (for example, I have fibromyalgia, so if I do either of those too much, it causes excruciating joint pain). So what if an autistic bahves "unusually" (according to wider society) either in public or private? That's perfectly normal and often necessary for self-regulation or self-expression. Embrace it! If more autistics go ahead and do it in public without worrying about the reaction of other people, it will become much more normalised in society's mind and thus less noteworthy! I will happily behave autistically in public and if people stare, it's not my problem!

Following on from the previous paragraph, do not endorse, support or engage with "therapies" or "treatments" that are aimed at changing an autistic's behaviours purely to suit NT preferences and desires. The big one is ABA - its ultimate goal is to render the autistic "indistinguishable from their peers" and thus train them to suppress autistic traits in order to present as NT, in order to conform to society's preferences and comforts. Gay conversion therapy uses the same principles (reward and punishment). These approaches teach (explicitly or implicitly) that being autistic is A Bad Thing and cause lasting psychological damage; I have adult autistic friends who have PTSD from being put through ABA. If you're a parent new to the autism world, seek out autistics for guidance and advice - it can be a scary time and you are vulnerable to being preyed on.

This particularly includes what is going on at the Judge Rotenberg Center, with the electric-shock practices, using pain and fear to control people (autistics and those with various learning and developmental disabilities). You can read more on this link to the petition that was set up recently by Cal Montgomery, Kieran Rose (An Autistic Advocate) and myself. PLEASE sign and share it widely: FDA: End abusive electric shocks.

Learn how autistics communicate and adjust your approach accordingly. We communicate differently from NTs; some classic indicators (though not necessarily set in stone, especially by the time a person has reached adulthood) are bluntness, lack of eye contact, literality, precision, different body language. It's probably why I feel so at home in the Deaf community, as both types of mind are very similar! It is no bad thing for autistics to learn NT communication styles, as it helps us know what to look for and how things work, BUT communication goes two ways and any "social skills training" MUST also include teaching NTs how autistics communicate. Both styles are valid; they're just different.

Educating people about autism, without going down the fearmongering, tragedy-narrative, ableist route. If you see someone making a claim about autism that you know to be false, say something! I tend to be gentle and polite at first because people often don't realise; however, if it becomes clear that they're persisting with falsehoods, I do get more...belligerent!

Listening to and amplifying autistic voices over NTs. We are the experts; we live it in a way that no non-autistic person does. If we are telling you how things are, if something you are doing is hurting us, listen to that. Like with today, I am desperately saddened and frustrated by the number of parents insisting on doing Light It Up Blue and shouting down autistics who are telling them that this hurts us and explaining why, by denying the link between blue and Autism $peaks. If something you are doing hurts us and we tell you so, don't gaslight us. Don't invalidate us. Use this month to promote autistic writers, bloggers, artists, advocates, etc, not Martyr Parents like Judith Newman, Whitney Ellenby, etc, who seek to profit financially (through books, speaker fees, etc), emotionally and publicity-wise (attention-seeking, self-publicising, pity-seeking, etc). And call out people who try to silence autistic voices and promote the just-mentioned autism profiteers.

Presume competence. Being autistic does not mean treating us as though we have no ability to think for ourselves. We have agency, we have feelings, we have boundaries, we are human, we deserve as much respect as NTs.

It's likely I've missed some things (as I said, rather pressed for time at the moment) but if I do think of something else that's pertinent, I will come back and edit this. And will be writing another, more all-encompassing post in the future when I have more time to read, think, organise, etc. 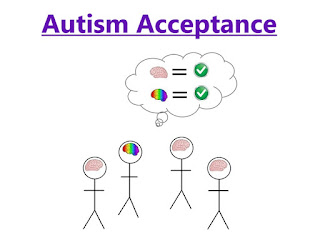