O is for Out-of-the-Box 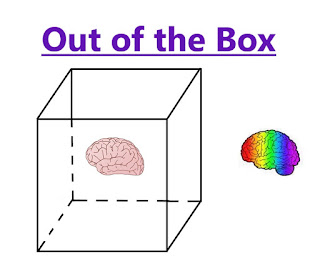 Thank you, Helena! Following our conversation yesterday I opted for this suggestion because it seems appropriate for this month's theme of acceptance. Although I'm generally trying to go for single-word options, this is an exception.

Many people have come across the phrase "thinking outside the box" and its variants, and it is certainly applicable to autistics. The NT majority of the world see things in one particular way, autistics in a different way, presumably because our brains operate differently. Neither is wrong, they are simply different, and can often complement each other. The box in this case is the NT way of thinking because it is the prevailing, majority neurology, considered the conventional and expected way of thinking. While people sometimes criticise us for thinking too rigidly, in too constrained and limited a manner, I think the same can sometimes be said for NTs. There are certain social conventions and perspectives, and people frequently go along with them and don't always realise that there are other angles and perspectives, so their views and input can be limited by the boundaries of the box. Autistics are not necessarily constrained by these conventions and thus can approach something in an entirely new - and sometimes unconventional - way.

This is an incredibly valuable trait and one that should be accepted and welcomed. It enables us to come at things from a different angle, give alternative perspectives, see things in another way. Having people with different approaches and perspectives on things aids understanding and increases the chances of all bases being covered. It's relevant in many diverse scenarios: work or school projects, design, education, academia, hobbies, and ordinary day-to-day life.

Because we are a minority, neurologically speaking, our different perspective can sometimes come as a bit of a surprise to NTs (particularly in the workplace, as so few of us are in paid employment) but it is certainly beneficial!

I have a very visual brain, which is likely to be due to my neurodiversity (autism and dyslexia), and that enables me to come at situations in a visual manner, which is a great complement to those who think in words. Often, I can provide an alternative angle on something, approach a situation from a different angle, one that the NTs around me hadn't even considered, especially if they have become particularly entrenched in conventional approaches.

This ability to think outside of the box is a valuable thing, and should be accepted and embraced.
Posted by autistic-on-wheels at 19:49

Email ThisBlogThis!Share to TwitterShare to FacebookShare to Pinterest
Labels: out of the box, perspective