Z is for Zone

Thanks to Pamela, and also to Gideon and Jenna for throwing a couple of suggestions on this subject at me as well.

Comfort Zones (Pamela)
This can be a tricky area to navigate, not least for parents new to the autism world who are being bombarded with often contradictory information, so they get overwhelmed and confused. This is where us adult autistics come in (see E is for Experience and X is for Xenagogue).

There is a persistent notion that parents have to constantly seek to force their autistic child out of their comfort zone in order to get them to accept new things. Wrong approach. Forcing does no good, can actually be counter-productive and is cruel. The autistic person generally has good reason for refusing to do something, and the answer is not to bully them until they are exhausted, their will is broken and they comply because they have come to realise that what they want and can cope with does not matter, but to seek out why they are refusing it, decide how important it is that they do/don't do it and then working with them to get round it if it is important - and accepting that if it isn't actually that important, there is nothing wrong with letting it go.

Ask yourself this:
I say this particularly in light of the most recent article about Whitney Ellenby (aka "ElmoMom"). I will be writing more on that on another occasion because this month is about acceptance and she demonstrates a distinct lack of it.

So why do we refuse to go beyond our comfort zone?

A lot of it comes down to anxiety and fear of the unknown. And the unknown is a massive thing for us, often overwhelmingly so. The world is so busy and chaotic that we need to know absolutely everything possible. It could be because we've picked up negative feedback about the thing from other people. Maybe we need more information. Maybe we've done it before so we know we can't cope with it. Maybe we're tired, or ill, or in pain, or hungry, so our ability to cope with something new and our anxieties, to tolerate sensory input, other people, etc is a lot lower. Maybe it throws our routine off too much. Maybe we had already planned to do something else. Maybe we're terrified of disappointing you, especially if we know you've spent a lot of money on it (particularly if in the past you have expressed disappointment, displeasure and unhappiness with us, or tried to make us feel guilty, about similar things in the past). Those are just some of the reasons.

One key aspect of autism acceptance is recognising that we have our comfort zones for a reason, acknowledging and respecting them and working with us.

When I'm stressed, tired, anxious, in pain, or otherwise in a less-than-optimum state, I need to be in my comfort zone in order to recalibrate and to simply cope with the world. I need to have some time to feel comfortable and safe. Pushing me on, keeping me out of that comfort zone, insisting on me feeling anxious, uncomfortable and unsafe, does nobody any good. These days I am fairly good at recognising my limits and articulating (whether it is spoken, signed, written or typed) them, and being firm about having them respected. As a child, if people encroached on my comfort zone when I couldn't cope with the world, especially if I had made that as clear as I could, I would smack them away, bite and scream.

If it's for something essential, such as a hospital visit, there are ways of managing distress and working with the autistic person. I will write about that on another occasion.

However, if it is for something non-essential, do you really have to do it? For instance, taking your autistic child to see Elmo live? Who is it really for (and be absolutely, brutally honest with yourself)? Are there ways to make the process easier on them, such as arranging accommodations like ensuring lighting so their fear of the dark doesn't overwhelm them to the point of meltdown (not "tantrum")? Again, I will cover this at some point in the future.

Take food. I used to be what is described as a "picky eater" (many of my issues with food were due to sensory issues, such as texture or taste) and whenever we went out for a meal I would only ever have a plate of chips, much to my parents' despair. And I know why - I feared trying new things in case I didn't like them, and I didn't want to disappoint my parents or want them to have wasted money. I knew it wouldn't be exactly the same as my mum cooked it; again, what if I didn't like it? And sometimes there were several things that sounded quite nice but there were the anxieties I've just listed coupled with there being too much choice and I couldn't decide. So I stayed in my comfort zone of just chips (maybe chicken nuggets if they had those) because my anxieties were just too much. As I've got older I have got better, and going off to university did help a lot with that - it meant that I was much more in control of food and so I could try new things at my own pace and thus wasn't letting down anyone else. These days I eat most things that aren't spicy (except celery and peppers). My husband has been amazingly patient with me on this - I used to hate mushrooms; he loves them. Not long after we started going out, I decided I wanted to try them, but I knew I had to be in the right place mentally, so he would put them in food but in pieces big enough that I could pick out if I changed my mind. It took about 2 or 3 years of this before I was finally able to do this but I did it. This was something I wanted to do and he let me lead him, let me set the pace, and never shamed or guilt-tripped me if I couldn't go through with it. Thank you so, so much for that, Gideon.

It is so, so important that wherever possible, pushing the boundaries of our comfort zone is led by us and is not imposed on us from outside, especially if they are non-essential. That can actually cause us more stress and make us less likely and able to step out of our comfort zone.

And remember that we have it for a reason, and if we say we need to stay in it, especially if tired, stressed, overwhelmed, etc, respect that.

"In the Zone" (Gideon, Jenna)
Earlier this month I talked about autistic hyperfocus in H is for Hyperfocus, and I'm linking it here because it is relevant. The phrase "in the zone" essentially means being hyperfocused, efficient and highly productive, with potential distractions not affecting the person who is In The Zone. The quality and quantity of things that can be produced (both material and otherwise) when someone is "in the zone" can be pretty phenomenal, especially for autistics when our Hyperfocus mode has been engaged! On more than one occasion at university I've bashed out an entire good-quality 3,000-word essay in a few hours, and sometimes when I'm writing fiction I've produced 4-5,000 words in four hours!

With the Judge Rotenberg Center petition, Kieran and I spent a solid 8 hours working on it, discussing it over Facebook Messenger (he's in the north east of England, I'm in the south west), researching weighty articles and documents in order to maximise its impact, tweaking it so the wording was just right, with minimal distractions affecting us because our hyperfocus had kicked in and we were In The Zone. And we were very pleased with the outcome of that because it meant that by the end of the session, we had something we were confident in. (For the record, in the last 5 or 6 hours, the number of signatures has rocketed from around 66,000 to just shy of 265,000!!!) If you have yet to do so, please sign the petition by clicking here, and if you have signed, please do share it with as many people as possible because it is a barbaric, inhumane practice that has no place in society and has been labelled as torture by the UN.

Being In The Zone can bring enormous benefits (as long as it isn't harmful) and that should be accepted and welcomed as a positive aspect of being autistic. Embrace it! 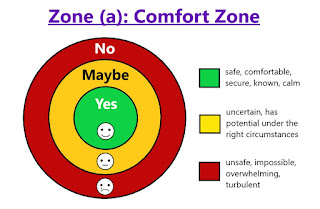 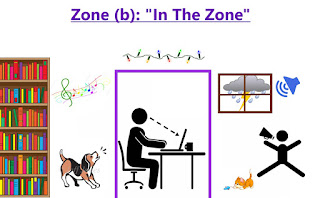