Autism Acceptance Month 2018 Day 10: I is for Identity

I is for Identity

Human beings have a tendency to categorise themselves and others in various ways and through this, identities are forged; people identify themselves through groups to which they belong and form communities around that - for example, political beliefs, religion, cultural heritage, language(s) used, hobbies, disability, and neurology. These different aspects of identity come together in unique combinations.

Identity is hugely important for many autistics, and autism is a central part of our identity, which is why the vast majority of us favour the use of identity-first language ("is autistic") over person-first language ("person with autism"/"person who has autism"). I did an entire long blog post on it this time last year, which you can read here at 30 Days of Autism Acceptance: Day 15, and there are many articles on the subject by other autistics and allies, all easily available.

I identify as Autistic, as do many others, rather than as "a person with autism" or "having autism" because autism is integral to our very being - it affects everything about how we experience the world and is not just an add-on. I have fibromyalgia and ME/CFS but they do not define me in the way that being autistic does; I would still very much be the same person without those conditions (just more busy and less tired/in pain!) whereas if I was not autistic I would  be a completely different person.

I recognise that there are difficulties with being autistic, and while a lot of those can be significantly alleviated if the world was more autistic-friendly, there are going to be times when all the accommodations in the world will not prevent a meltdown. However, I would not change my neurology for the world and I would never want to not be autistic. It has given me the ability to hyperfocus in a way thatmight not be possible if I was NT, have an incredibly retentive memory for things that interest me (although I'm still incapable of going into town or to Sainsbury's without a list if I'm going to have any chance of getting everything I want!), a level of passion that I'm not sure I'd have if I wasn't autistic, an eye and ear for detail, a visual brain (really beneficial for someone who's involved in the Deaf community and wants to be a BSL/English interpreter!), the ability to think differently from others and thus put a different perspective on things and probably many others.

Having a formal diagnosis has enabled me to be confident in my identity as an autistic woman, which I went into more detail about earlier this month in the D is for Diagnosis post.

Being autistic defines me. I see many people, both autistics and parents, say that they "won't let autism define [them/their child]", but that's not actually viable, because the very nature of autism influences absolutely everything about a person: how they perceive, experience and interact with the world, how they respond to things, how they think, how they process, how they communicate, how they interpret things, how they manage tasks, how they learn... Everything.

Accepting an autistic identity is crucial for mental wellbeing. I don't mean that once you accept the identity everything is immediately going to be perfect, but it does allow for improvement and self-confidence. It helps you understand who you are and how you experience the world. If you are constantly fighting against that aspect of your identity, it makes it very difficult to progress because you are essentially at war with yourself, rather than utilising your strengths and being kind to yourself with and accepting of your difficulties. Since discovering I was autistic, I have been much more gentle with myself when I struggle, reminding myself that it's OK if I don't feel able to cope with somewhere with multiple background noises, that it's OK to request that people are clear and direct rather than dropping hints (because I cannot pick up on hints, ever!), etc. But also, I have come to recognise my strengths and utilise those.

Once I accepted myself as autistic, I became much more confident in myself. I had much more insight into myself and how I related to the world, and it enabled me to find others who shared this identity and thus find a community to which I truly belonged. I wrote a bit about this process last year in Harry Potter, autism and me. And this can be wonderfully liberating.

Accepting that I was autistic and strongly identifying so gave me the confidence and self-esteem to be fully and authentically me, without restraining behaviours and communication styles that were autistic and trying to adhere to NT standards and conventions that felt uncomfortable, unnatural and wrong. Acting NT (or at least, trying to follow conventions that would reduce the likelihood of me being bullied, singled out and excluded). Stimming in public? No longer suppressing that just because some people think it's weird! And to be honest, the more people who are unafraid to act autistically in public and are themselves, the better - it becomes less unusual, less remarkable, and will hopefully lead to greater acceptance because people will realise it is simply one aspect of humanity.

And if autistic children see autistic adults accepting their identity and being authentic and true to themselves, hopefully they will be more confident in themselves. The Deaf community, as I've mentioned previously, has a concept called "Deaf positive", and it's all about being confident in youself as a Deaf person, as a sign language user, as equal to hearing people, accepting and embracing your Deafness and being part of a community of people like you. Deaf youth can look at Deaf adults who are comfortable and confident using sign language in public, requesting and explaining communication needs, living happy and successful (however you want to define that) lives.

Part of autism acceptance is the autistic equivalent, which I refer to as Autistic Positive. We desperately need that and autism acceptance - true acceptance - means that autistic people are confident to be themselves, accepting of how their brain works, because NT society accepts them ("acceptance is an action" is a common phrase you'll see around, and it really is - it requires people to make effort to include autistics and to not try to make us NT, to accept us as we are) and confident in their identity as an Autistic person.

I hope this makes sense as I'm a bit tired and have been thinking heavily in BSL rather than English! 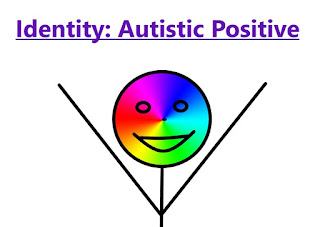