S is for Social Media

This one links in nicely with C is for Community, F is for Friendships, J is for Justice and tomorrow's T is for Technology.

You often hear people bemoaning the alleged detrimental effect social media has had on our communication skills, our relationships, our mental health, and so on, and you do have to be careful because that can happen, especially because social media can give a skewed presentation of people's lives. There are plenty of things I don't post about on Facebook and I'm sure that's applicable to most people.

But social media can also be an exceptional tool and massively beneficial, which is what I'm going to write about today, particularly focusing on its role within the autistic community and the striving towards autism acceptance.

Before social media (Facebook, Twitter, YouTube, Tumblr, Reddit, Instagram, etc) existed, it was more difficult to stay in touch with as many people. I personally only use Facebook; I've considered Twitter (as Autistic on Wheels) but I find it moves too fast, there can be too much information, too many responses and rapid reactions, and it's too overwhelming for me. I may experiment with it in the future, I may not. Facebook is a great way for maintaining contact with people you might otherwise not; I have on my personal Fb a number of people I was at secondary, and even a few at primary, school with. I'm a writer; people and their lives fascinate and intrigue me. And we live in a world where people converge and then part ways; wanting to stay in contact in such a fast-paced world, especially when you meet so many amazing people, can be challenging, whether your life is busy with activities from dawn till dusk, or it's rather more slow-paced. My health issues, particularly that fatigue- and brain-fog-related aspects, mean I am at home a lot of the time, so it's harder to stay connected with the wider world and not feel lonely and isolated. Social media enables me to stay connected and feel involved in the world, even on the bad days when I can barely manage to make a cup of tea. I can chat with friends on Messenger, I can stay informed about what is going on in people's lives, I can keep up-to-date on events and I can do "armchair activism" (a term often dripping with derision when said by many, but it's increasingly powerful and much more accessible for the marginalised of society than going out on the streets). One of my absolute best friends lives in Iowa (we originally met through a Catholic community on LiveJournal; since connecting there we've visited each other 3 times, and her parents have informally adopted me as a third daughter). She's 6 hours behind and several thousand miles away from me, but we talk often and love each other as sisters.

It was also a lot harder to connect with people you didn't know in real life, face to face, even if they were members of the same community as you, such as the autistic or Deaf communities, members of whom are disparate, dispersed throughout the world mixed in with neurotypical or hearing people. I do sometimes accept Facebook friend requests from people I've not met in person, but we do have to have interacted on some level in groups and so on prior to connecting directly - I don't just accept requests from random people! I have quite a few people on my Facebook friends list who I have not met in person, although hopefully eventually we will meet. I am planning to meet Ann M in person later this year when she comes down to the West Country (and introduce her to the delights of the Lyme Bay Winery), and I also hope to meet many of my fellow activists.

Social media has revolutionised how disparate communities come together and connect. In the past, my contact with other autistics (what some of us call our "neurosiblings" - I quite like that term) would have been largely restricted to those who lived locally to me, with perhaps one or two from slightly further afield, perhaps a couple of counties over. Now, though, we can connect from all over the globe! I regularly interact with autistics in many different countries, including Iceland, Brazil, Singapore, the Middle East and others, and am Facebook-friends (and interact directly) with autistics in Canada, the US, Sweden, Australia, New Zealand and Ireland. Possibly one or two other places as well. And I have found some amazing, fantastic people in the autistic community, people I would never have met if it wasn't for social media. Ditto for several allies who have become friends.

It's also a great way for autistics who use alternative communication methods and high support needs to be part of the community in a way that they might not otherwise be able to, and for parents/family members and autistics to come together and advise, inform and support. That said, there are many toxic groups and pages out there, so you have to be extremely careful where you go, because of the Autism Parents™. It's absolutely fine (and healthy!) to be highly selective about where you spend your time and which pages you follow. When I come across an autism page, the first things I do are look at the language use (if it's solely person-first language it puts me on alert, as it's unlikely to be run by actual autistics) and, most importantly, which pages are Liked by that page. If there's anything relating to Autism $peaks, Light It Up Blue, TACA or other cure or pseudoscience organisations/people, that's a big Nope.

And social media isn't good for just meeting other autistics; it can be a great way to converge, organise, plan, campaign and spread our activism. Longer-term followers of AoW will know that I was one of the key players in the Not Locked In counter-campaign to Caudwell Children's Locked In For Autism stunt, which took off rapidly and successfully last year. That came about solely through social media - we met through a UK autistic-and-neurodiversity group, an article about one of the events came up, and autistic hyperfocus went into overdrive! We mobilised on the Thursday night, and by Friday morning had a discussion group on Facebook, a Facebook page, the Twitter profile was reactivated (there were previous unsuccessful efforts to end LIFA) and a petition calling on Tesco to withdraw. The other two handled the social media and press side of things while I hammered out goodness knows how many emails, and by the Monday afternoon Tesco had pulled out. All this was done through social media. More recently, I've been one of the main three organisers of the petition against the Judge Rotenberg Center, which has in the last few days, thanks to ASAN's involvement, rocketed from around 4,000 signatures to over 14,200 when I checked a few minutes ago! Thank you everyone and keep signing and sharing it! Let's END this torture! Again, all this came about through social media, through a group of autistic activists that I'm a member of - one of our members was at the ADAPT protest outside Scott Gottlieb's house and posted about it, I enquired about whether there was a petition or anything that those of us outside the US could sign or otherwise show support for, and within 48 hours, Cal, Kieran and myself had finalised the petition and activated it.

Social media has enabled us to come together and connect, to support each other, to discuss and spread ideas and campaigns, to work together, to form a network across national borders and oceans, and create a distinct community that was previously diffuse and fragmented. And for that I am overwhelmingly grateful. Social media has made a massive positive difference in the lives of many autistics around the world.

Apologies if any of this lacks coherence (please do let me know and I will endeavour to edit it) but circumstances conspired to ensure that I only got about two and a half hours' sleep last night, and I spent several hours earlier today at an event for increasing Deaf people's participation in physical activity in Devon that I'm looking at getting involved with, so this has taken me rather longer to write than originally anticipated. The lack of sleep means it's taking me twice as long to think coherently and then type accurately (tiredness always exacerbates the dyslexia symptoms), and the event earlier means I'm still partially thinking in another language (BSL)! 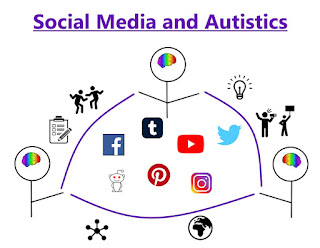