J is for Justice

Thanks to Gideon (husband), Bob and Karen for this suggestion.

It's a common belief, from what I've come across, that autistics often have a strong sense of justice, fairness, and right-and-wrong (once we, like anyone, are old and mature enough to understand), and from both experience and reading that seems to be fairly accurate. And that is definitely a positive aspect of being autistic, as far as I'm concerned.

Why is this the case? There are a number of possibilities. I think a lot of it is tied into the fact that we tend to think in black-and-white and absolutes, and we like rules (as long as we agree with and understand them!) Our brains are particularly good at defining things, putting them in clear and distinct categories, and metaphorically drawing firm lines. We seem to have a natural inclination towards honesty (often described as "brutal" honesty, because we tend to value truth more highly than people's feelings), and the concept of deception and falsity baffles us. Maybe some of this is because we find it difficult to tell when someone is lying to us and thus we have been hurt and taken advantage of by this - which is horrible. And contrary to the Theory of Mind concept (which is becoming more discredited), many of us can transfer and relate our experiences to others and recognise that if we hate being wronged and experiencing injustice, so will others. This ties in well with the emerging idea that instead of us not being able to experience empathy (the traditional belief), many of us instead experience intense, sometimes painful, levels of empathy - I know I and many of my autistic friends do. These all contribute to my own sense of justice.

It can sometimes be problematic, usually in the context of NT social conventions. I'm the daughter of two teachers, so I always had a firm understanding of what was and wasn't acceptable in school settings, and school rules generally. I was mainstreamed (autism is not something anyone considered about me until my mid-twenties) so my classmates were, from what I know and can mentally review now at the age of 33, pretty much exclusively NT. Rules were always absolutes, in my mind, and I'll be the first to admit that school rules took precedence over social rules; school rules made sense whereas a lot of NT social rules didn't; school rules had logic behind them and existed for a reason, but NT social rules seemed too abstract, abitrary, illogical and irrational, and down to personal whims; school rules were clear, firm and unchanging (unless something happened to cause a change, but the reasoning generally made sense if that was the case), but NT social rules frequently struck me as fuzzy, wishy-washy and constantly shifting. As an analogy, school rules were hard stone; NT rules were quicksand.

Because of this, if someone broke a school rule, I had no qualms about calling them out on it and reporting it, which invariably resulted in me being punished socially. I never understood why (after all, they had broken a rule) until I was much older. Even now, although I see how I transgressed socially, I stick by my decisions.

One of the things I value most is justice and fairness; it's probably why I make such a good Hufflepuff!

This strong sense of justice and right-and-wrong, coupled with our hyperfocus, can make us a formidable force in campaigning for autistic rights (and other causes), as I and many of my fellow autistics have demonstrated and are currently demonstrating.

I will write more about this another time, when I'm able to more thorough research and go into more depth. 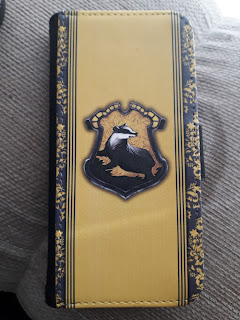 Quora: Is it true that people with ASD have a strong sense of right and wrong?
Posted by autistic-on-wheels at 12:10