Open letter to The Telegraph 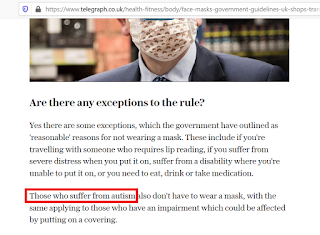 In reference/response to the following article:

Face masks in shops: rules on compulsory coverings, fines and who is exempt from wearing one

(I don't actively seek out this publication to read, as their politics and worldview contrast greatly from mine; it came to my attention as a news article via the Upday news app that my phone came with, so I read it to see what they said about autism-related exemptions.)

Here is what I wrote to them:


I am autistic. This is highly relevant to the article content.

The article, when detailing those who are exempt from wearing face masks, uses the phrase "Those who suffer from autism". We suffer from the impact of a world that does not (and frequently will not) accommodate our differences. We suffer from systemic, societal ableism and discrimination as a result of having a neurology that deviates from the majority of the population. We suffer from co-occurring conditions (particularly mental illness) brought about from trauma, bullying, ableism and discrimination due to being different from the majority. We suffer from low self-esteem and a sense of being "broken" and "defective" as a result of constantly reading things like this statement, phrases that reinforce the (false) notion that we are lesser, inferior, wrong, a world telling us we are inherently defective and that our way of being is unacceptable.

We DO NOT "suffer from" autism itself.

This is a highly offensive phrase.

This type of language is deeply hurtful and harmful. It is outdated, inaccurate and ignorant, clearly written by those who have no real knowledge or understanding of autism or what it means to be autistic. Autism is not a disease; it is a perfectly natural variant in human neurology that means we process and interact with the world differently from the neurotypical majority.

This phrase being used in such a prominent, wide-reaching publication such as The Telegraph causes significant harm to autistic people, and normalises and renders acceptable to the wider public such pathologising language. It perpetuates the notion that autism is something terrible. It perpetuates fear and misunderstanding. It enables the flourishing of false, sometimes dangerous "treatments" such as MMS and the Nemechek Protocol. It promotes (often insidiously) the notion that eugenics is acceptable when it comes to autism. It is complicit in the filicide of disabled children by their caregivers as something understandable and makes it acceptable in the public mindset to sympathise with the caregiver. It contributes to poor self-image among autistic people.

The correct phrasing should be "autistic people".

24/07/2020 - They have replied to me. Apparently it doesn't breach the Editors' Code so it cannot be considered a "complaint", so it's been passed on to the editorial team. I just replied in an effort to educate them on suitable language and hopefully obtain some sort of promise or guarantee that they will never again use such atrocious wording. I have also said that I am happy to continue the conversation regarding appropriate language in relation to autism.

If you want to add your own voice to pointing out the inappropriate wording, either use their Contact form https://www.telegraph.co.uk/customer/contact-us or, if you are unsure which option to select from the drop-down menu, there is the general email address at the bottom of the Contact Us page.
Posted by autistic-on-wheels at 17:35