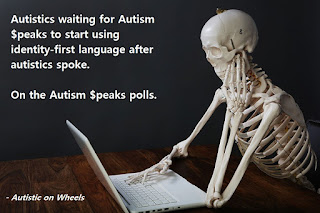 On April 25th 2020, Autism $peaks held a virtual/individual alternative to their usual "Autism Walks", due to the current coronavirus Covid-19 situation. You can find it here: https://www.facebook.com/autismspeaks/videos/666979750790422
Word about the event, as so often happens, swiftly got around the autistic community. Autistic people flocked to the live-stream video to speak.

Here's my contribution. To my knowledge, as of 5pm 26th April, it is still there (although it's hard to find now, due to the 4,400 or so other comments, many of which are from other autistic people speaking out against Autism $peaks and the hypocrisy of this event, which is fantastic to see; A$ has been deleting comments left by some autistic people, but there is such a huge quantity that many are still there and visible, which is brilliant).

Kindness? From your organisation? The hypocrisy and doublespeak is so intense that I'm not sure whether to laugh or cry. Why? Because kindness is the LAST thing you as an organisation has ever shown autistic people.
You want kindness, Autism Speaks? I have a few suggestions (not in order of importance, just the order in which I think of them) - and for the record, I am autistic:
1) Stop constantly and persistently silencing #actuallyautistic people (that includes deleting any comments that you don't like) - start LISTENING to autistic people; you say "It's time to listen" but it's perfectly apparent that that does not include listening to autistic people
2) Stop constantly and persistently ignoring #actuallyautistic people - start taking on board what we say and actually do something productive and constructive (such as what we suggest)
3) Stop using and promoting ABA, which is a harmful intervention that causes PTSD in autistic people (I recommend you start with Henny Kupferstein's research on the matter), an "intervention" with the same principles and practices as gay conversion therapy (Lovaas is responsible for both, in case you were unaware)
4) Stop treating us like tragedies and burdens (I Am Autism and Autism Every Day make it perfectly clear what you think of us), and that includes continuing to uphold parents as warriors and superheroes and so on just for BEING PARENTS (it's literally their job description, they chose to have children) because that sustains and reinforces the notion that parenting autistic people is so much harder and that it's basically a nightmare
5) Stop using the puzzle piece for autism - it needs to be consigned to the history books; we are #PeopleNotPuzzles (check out https://intheloopaboutneurodiversity.wordpress.com/2019/03/20/the-ableist-history-of-the-puzzle-piece-symbol-for-autism/ for your introductory reading, and then start doing some more reading, and there's some good research showing that the puzzle piece has inherently negative connotations) - we do NOT have pieces missing, we are NOT puzzles, and we'd seem far less puzzling if you actually LISTENED to autistic people
6) Apologise for the aforementioned horrific short films painting us as tragedies, burdens, etc, and that an autism diagnosis warrants grieving (yes, you have significantly contributed to that mentality and culture)
7) Stop blindly supporting the parents who murder their autistic children (your tragedy/burden narratives in the aforementioned films are drectly responsible in part for enabling and perpetuating that mentality) because of their disabilities, and start channelling far more resources into supporting those people and families who are struggling
8) Start putting substantially more of your funds towards actually supporting autistic people (and that does NOT include ABA)
9) Stop treating us as broken neurotypicals in need of fixing (again, that includes stopping promotion of ABA); we are NOT neurotypicals "trapped" inside a "shell" of autism, we are autistic through and through; we DO NOT NEED FIXING
10) Stop using person-first language ("with autism"/"has autism") and start using the identity-first language ("is autistic") that the overwhelming majority of autistic people prefer (by all means use both, but the exclusive use of PFL, despite you being told again and again and AGAIN, even on your own polls, that we strongly and overwhelmingly favour IFL, makes it abundantly clear that you ARE NOT LISTENING TO AUTISTIC PEOPLE. https://autistic-on-wheels.blogspot.com/2019/07/resource-key-articles-on-identity-first.html
11) Stop centring non-autistic parents instead of actual autistic people (this links in with 1, 2, 7 and 9 in particular).
12) And don't even get me started on how little of your funds are spent on supporting autistic people (1.7% in 2017 - yes, that's one point seven percent).
Your ableist attitudes towards us contribute to a substantial portion of mental health problems among autistic people because you contribute so much to broader societal attitudes about us. You say "different, not less", but less is how we are made to feel, and you have directly enabled this. Not just you, there are plenty of other groups, but you have a lot to answer for in that regard.
You may have made recent superficial changes, but it's going to take a LOT more than a bit of window-dressing to even *begin* to undo the massive hurt you have caused autistic people since your inception - and to be honest, it's unlikely you ever will, the damage is that severe. Actions speak louder than words.
Autism Speaks DOES NOT speak for me.
We DO NOT need (or want) a cure. Autism is a perfectly natural and acceptable neurological variation and should be accepted.
You have directly contributed, through your genderised use of blue, to the misdiagnosis and underdiagnosis of female and nonbinary autistics, because you and the colour choice (chosen for genderised reasons) have perpetuated, and continue to contribute to the perpetuation of, this myth that autism is a male thing.
You know who we SHOULD be lighting it up blue for? The NHS (the UK's National Health Service) and other care workers, especially in the current pandemic. (Blue because that's the NHS logo colour, for non-UK people.) NOT AUTISM. #LightItUpGold #RedInstead #AutismAcceptance #NothingAboutUsWithoutUs
Posted by autistic-on-wheels at 17:00