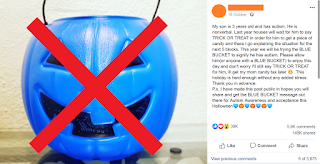 So, last year (2018) a few of us in the autistic community encountered the following image claiming that carrying a blue pumpkin for trick-or-treating signified that the person was autistic: 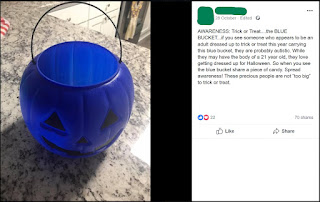 [Text reads: AWARENESS: Trick or Treat...the BLUE BUCKET...if you see someone who appears to be an adult dressed up to trick or treat this year carrying this blue bucket, they are probably autistic. While they may have the body of a 21 year old, they love getting dressed up for Halloween. So when you see the blue bucket share a piece of candy. Spread awareness! These precious people are not "too big" to trick or treat.]


It was not, in fact, anything like the trend or convention it is made out to be. It was ONE SINGULAR Martyr Parent. The shop from which the bucket was bought sold buckets of all different colours, not just blue. There was a Snopes article debunking its presentation as a widespread trend. I wrote my own rebuttal/explanation of why it was so harmful on the Autistic on Wheels Facebook page, which you can read here:

For those readers who don't use Facebook, this is what I wrote in 2018:

First of all, this is NOT a widespread thing; it appears to be one person's thing (Snopes is a pretty trustworthy source; see the link at the bottom of this post for their more detailed verdict on the post).

Secondly, blue-for-autism is specifically related to Autism $peaks, a US-based organisation pretty much universally regarded as an anti-autistic hate group by the #actuallyautistic community. The choice of blue has been unnecessarily gendered by Autism $peaks and sidelines/ignores/excludes female and nonbinary autistics (due to the reasons it was chosen).

Thirdly, and VERY importantly, this blue pumpkin bucket will confuse matters, potentially dangerously so, with the teal-pumpkins-for-food-allergies practice. In dim light, teal and blue are practically impossible to tell apart, putting children with food allergies at risk.

Then there's the massive visual target that marks someone out as potentially vulnerable (and many kids won't want their neurology broadcast to the world without their explicit permission). There are better ways to go about this - if you *have* to do something to let people know the child is autistic, something more discreet, like a badge, is much better, or a card the child can choose to show people if they wish to.

Guilt-tripping people and manipulating their emotions by playing the disability card is NOT COOL.

Finally, the language used: "the body of a 21-year-old" and "appears to be an adult". No, they ARE a 21-year-old and they ARE an adult. This is incredibly infantilising language and implies their body and brain are completely separate entities. Then there's the use of the word "precious". *shudders* Again, incredibly infantilising, condescending and patronising. No thanks.

Let's hope it doesn't catch on - although I'm sure the moment this comes to the attention of Autism $peaks they'll want to capitalise on it in order to raise funds for their toxic brand of autism "awareness" and their not-eugenics-honest-guv research.


Naturally, as I predicted, Autism $peaks was quick to jump on the bandwagon. 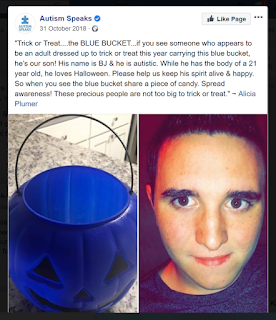 Once Halloween passed, it died down and many of us in the autistic community hoped (and prayed, for those of us who are of a religious persuasion) that it would swiftly be forgotten and disappear into the black hole of the internet.

Except it didn't. The opposite did.

In the last three weeks or so it has EXPLODED across the autism community. The Paaaaarent brigade is pushing it and spreading it as a good idea like the plague, countless news outlets (including reputable, wide-reaching ones like The Independent here in the UK, from whom quite frankly I expected better) are promoting it and the autistic community wants it to f*** off and DIE.

It's now EVERYWHERE. From the lone post and image above from 2018, there is now a plethora of posts of different blue buckets, all loudly proclaiming it to symbolise that the carrier is autistic. Well, usually that the carrier "has autism". And some of them are full of infantilising language like the original 2018 post, which is UNACCEPTABLE. If someone is 13, or 21, or 35 or whatever, just say that. If you absolutely have to disclose their age at all! DO NOT say they "have the body of a [fill in age]-year-old", and CERTAINLY DO NOT say that they have "the mind of a child" or any variant. It's patronising, condescending, infantilising and completely inappropriate.

2019 images are at the bottom, should you wish to peruse them.

Since this plague/virus/horror/blight on humankind* has exploded across social media, various autistics and allies have written posts reiterating WHY this is A REALLY BAD IDEA and why you SHOULD NOT DO IT. You can read them here:

"Even if blue pumpkins were 100% effective (they aren't) and totally safe for autistic kids to use (they aren't) and didn't pose a risk to kids with dangerous food allergies (they do), they'd still be wrong to use.
They promote the idea that certain people with certain documentation of particular statuses (like "autistic child") should be exempted from oppressive norms (like the demand that someone perform the trick or treat script using their mouth) -- but the norms should remain in place for everyone else.
Blue pumpkins are a failure of allyship, and not only to the children who carry them."


Articles
A Diary of a Mom: Some Thoughts About Blue Pumpkins
Autistic and Cheerful: Supporting autistic kids at Halloween (brief mention)
Autistic Pride Reading: We don't need no Blue Pumpkins!
CTV: Autism Canada doesn't endorse 'singling out children' with blue Halloween buckets
Fierce Autie: The Blue Pumpkin and Why I will Never Get One for my Children
Grounded Parents: Today's Terrible Idea: Blue Pumpkins for Autism
Not An Autism Mom: 3 Reasons My Autistic Children Will NOT Carry a Blue Pumpkin for Halloween

Additionally, other fact-checking and myth-debunking websites have kicked into action to attempt to debunk this bollocks; you can read their articles here:

Debunking articles
FullFact: Blue trick or treating pumpkin buckets are not official symbols for the autistic community
Snopes: Does Carrying a Blue Halloween Bucket Signify That a Trick-or-Treater Has Autism?
That's Nonsense: Does using a blue bucket at Halloween indicate autism? Fact check

It's worth noting that a lot of autistic-run Facebook pages are sharing these posts and articles because they, too, oppose the blue bucket, and adding their own comments on it.

One of the biggest concerns that I and many other autistic people have (as I mentioned in the original AoW post, above) is that in the dark or dim, multicoloured lighting, blue and teal pumpkins could be confused, which is Potentially Really Dangerous for people with allergies. I've already seen easily 100 people on a handful of Facebook posts getting confused about this, just in the last few days, and so have many other people I know. The Teal Pumpkin Project is A Real Thing, and one I and many other people wholeheartedly support. You can read about it here: 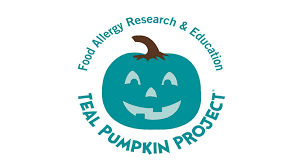 It's a brilliant idea, and one that I really hope spreads further every year.

The other big, important concern is, as mentioned above, that if this becomes a mainstream, promoted thing, vulnerable people are being put at great risk, because these buckets are a huge target, having the potential to attract predators and bullies. Additionally, those people carrying blue buckets "because autism" are learning that their neurology/diagnosis is for the public domain and they do not have the same right to privacy or consent/withholding consent as NT and/or non-disabled people do. This is why this whole thing is An Incredibly Bad And Dangerous Idea.

And while on the subject of consent, what if the person doesn't want a blue bucket? What if they don't like blue? What if they would rather have pink, or red, or green, or any other colour because that's their favourite colour? If the autistic child wants a blue bucket because blue happens to be their favourite colour, that's fine, because that's their choice and it's not because it's parading their neurology for all the world to see without their consent. There are plenty of Martyr Parents that simply wouldn't care if the person doesn't want blue - clear evidence that it's all about the Parent, not the autistic person. I've seen a number of parents saying that they're getting their autistic child a blue bucket "because autism" and the child has no say over whether they even want a blue buclet.

Alternatives? Don't disclose. No autistic person owes you their diagnosis. If you really feel that there needs to be something to indicate that the person is autistic, opt for something more discreet, preferably something that the autistic person can choose to disclose or not. If you want something discreet, try for something like a card the person can show to people. Maybe a badge. But NO puzzle pieces, NO blue buckets. The autistic community widely rejects the association of blue with autism.

Blue-for-autism means Autism $peaks, There is a plethora of articles available from many autistic people (and some allies) about why they are a really, REALLY bad organisation. That's not a post for now. If you want to know more, Google is your friend, go to autistic-run blogs and Facebook pages. The information is easy to find.

DO NOT put people at risk. DO NOT support this harmful idea. DO speak out against it wherever possible. 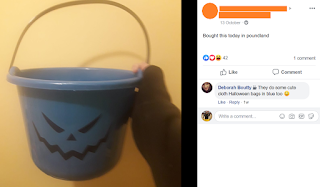 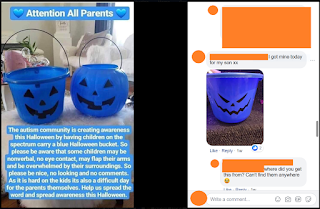 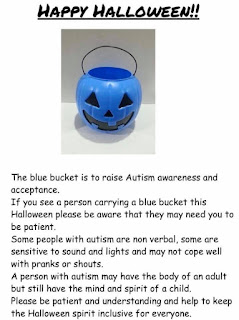 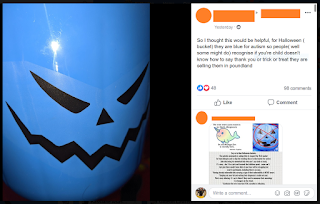 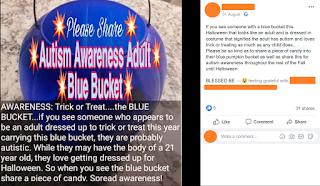 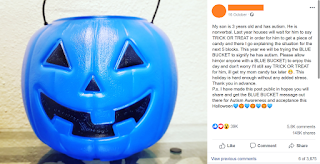 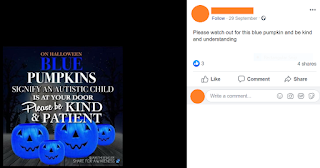 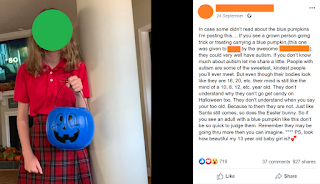 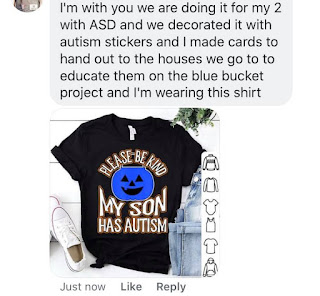