On-stage dehumanisation of autistic people: All In A Row and #puppetgate 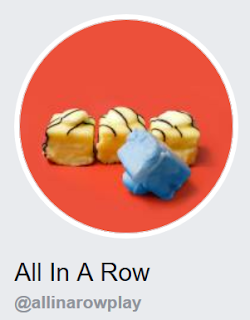 "[I]t seems that the company was advised by the National Autistic Society against aspects of the production and decided to go ahead with them anyway."

"In a discussion with the BBC, Alex Oates responded to this criticism by saying 'people are making the point that we’re dehumanizing him…and, you know, in a way we are. But that wasn’t the primary reason we chose the puppet.'"

I am not in a position to attend the play to write my own review of it; however, this man, a senior lecturer in drama and theatre, has, and this is his thorough review of it. I'm not sure if he's autistic or not (although some of the things he says in the review suggests that he is).

I am utterly appalled and disgusted at Oates' attitude, as are many, many other autistics. He ignores advice and guidance from the NAS (they are not without problems themselves, but in this case they absolutely got it right) and has the audacity to openly admit to dehumanising us. At least he admits to this callous action, which means it is undeniable and thus he cannot attempt to backtrack and claim he didn't. But the fact that he says it "wasn't the primary reason" implies that it was a reason, which suggests that, consciously or subconsciously, Oates does not see autistic people as human. And that is horrific.

The play's Facebook page has been deleting any and every comment expressing any objections to the puppet use, which makes it abundantly clear that our voices are explicitly unwelcome and that All In A Row has no interest in representing us fairly or accurately.

Yet again autistic perspectives are silenced.

In some articles they have claimed that the reason they opted to use a puppet rather than an actor is a combination of child-labour laws here in Britain and that the subject material would be too difficult for a child actor to handle, the emotional impact too difficult. That seems like a cop-out, an excuse, an attempt to pacify the autistic community, because if that was really the primary concern, there is a simple way around it - use a young adult actor fresh out of drama school. It would be far from the first play to do so: I present to you Harry Potter and the Cursed Child. In that, we initially meet the two protagonists (Albus Potter and Scorpius Malfoy) at the age of 11, with the main action occurring at the start of their fourth year, when they are 14. They use adult actors for these roles, and because they have fantastic actors in the roles, it works brilliantly and there is no issue with suspension of disbelief (I've seen it twice, with two different casts, and never once did I find myself thinking, "They're too old", same for everyone else I know who has seen it). I even said so on a post on the Southwark Playhouse post where they try to fob us off claiming "child protection", and on AIAR's page underneath the Southwark Playhouse post; I took screenshots because All in a Row has been very vigilant about deleting each and every comment criticising their decisions and dehumanisation of us. 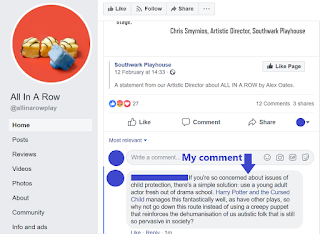 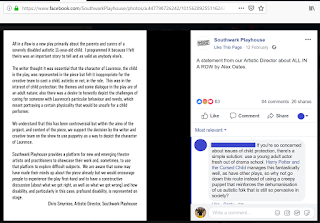 So All in a Row has NO EXCUSE.

[For those using screenreaders, my comment is: "If you're so concerned about issues of child protection, there's a simple solution: use a young adult actor fresh out of drama school. Harry Potter and the Cursed Child manages this fantastically well, as have other plays, so why not go down this route instead of using a creepy puppet that reinforces the dehumanisation of us autistic folk that is still so pervasive in society?

And then there's this highly problematic cover/publicity image they use:

3 yellow French Fancy cakes neatly lined up, with one blue one (for the record, French Fancies do NOT come in blue; they come in yellow (lemon), brown (chocolate) and pink (plain)) upended and out of line in front of the yellow cakes. This blue one (Autism $peaks blue, no less!) is clearly meant to represent Laurence, the autistic child character, which sends up all kinds of red flags because of the connotations blue carries when it comes to autism (ie. Autism $peaks).

Symbols are hugely important in theatre (and fiction generally), so this cannot be an accident - so if they are using blue to represent autism, either they are unaware of this link (which shows a worrying lack of research) or they do not care that the autistic community on the whole rejects blue being used to represent autism. Given their actions mentioned above regarding dismissing the NAS's recommendations and the persistent deleting of all comments expressing objections, I'm inclined to go with the latter.

Using a puppet is another symbol: in this case a symbol of dehumanisation and absence of agency. The puppet in use is, quite frankly, creepy as hell. The face is grey (and grey is often associated with blandness, dullness, apathy and other such things - hardly anything to elicit positive feelings about it) and the expression does not change, suggesting passivity, and absence of emotions, thoughts and feelings (all accusations thrown at us in the past). It feeds into the false "blank slate" concept that Lovaas (the founder of ABA) so loved to espouse, reinforcing this concept that we are not people inthe same way that NTs are. Even more so because slate is grey. Additionally, the puppet has to be operated by another person, reinforcing the notion that autistic people do not have agency, that they need to have their every move prompted by another (implicit: NT) person. Finally, it perpetuates the false idea that autism is a shell, an idea so often used by those pushing the tragedy narrative (ie. that there is a "normal" NT child "trapped" inside the "shell" of autism). In short, it creates the idea that autistic people are not fully human, do not have agency, thoughts or emotions, and are just a shell operated by another.

This is a play that could have had great potential, that could have done so much good. But instead, like so many works of fiction written by NTs that feature autistic characters, it perpetuates the tragedy narrative of autism and literally completely dehumanises us. And on top of that, it was highly inaccessible to autistic people, which makes this even worse than it already was.

It is clear that Alex Oates (and by extension director Dominic Shaw and Southwark Playhouse) have no interest whatsoever in listening to autistic people or accurately representing us. Their persistent disregard of autistic voices has become wilful ignorance and active silencing.

Email ThisBlogThis!Share to TwitterShare to FacebookShare to Pinterest
Labels: ableism, All In A Row, autism in fiction, autistic characters, dehumanisation of autistics, nothing about us without us, puppetgate, representation, theatre