Autism, driving and the DVLA

DVLA: Driver and Vehicle Licencing Agency
UK government department that deals with registration of vehicles and the managing of driving licences.

There's been a sudden explosion of conversation in the UK autistic community over the last few days regarding what seems to be a very recent revision (with no announcement) by the DVLA regarding the disclosure of an autistic neurology to them.

Previously, a person only needed to disclose to the DVLA that they were autistic if it had an effect/impact on their driving.

As of last month that seems to have changed to it being compulsory to declare. But people have still not been 100% certain about this because there appears to be some contradictions on the DVLA website. Ann Memmot posted the other day about this subject, which you can read here: Driving Whilst Autistic - The Evidence

The DVLA website in the last recently (nobody is quite sure precisely when) removed the section about only needing to notify them if your autism affects your driving: 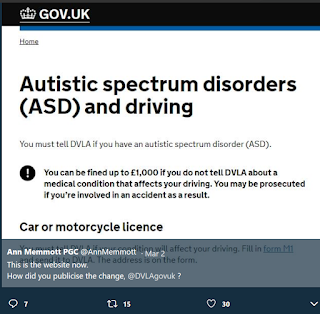 The Motability (organisation that leases cars, and powered scooters and wheelchairs to disabled people) website only gives advice, dated May 2017, for those who do not currently hold a licence and are considering applying for one (there is nothing about those of us who held a full licence prior to receiving an autism diagnosis): 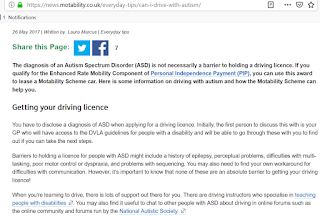 The National Autistic Society (NAS) has also attempted to seek clarification on whether disclosure is compulsory or only under certain circumstances. Last week they were under the impression that disclosure is only required if aspects of a person's autism adversely impacts on their driving ability.

The National Police Autism Association last week were also under the impression that it was only necessary to disclose your neurology if it affected your driving: 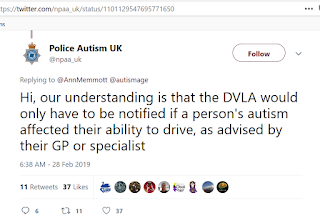 As of the morning of today (4th March 2019), the NAS has confirmed that we HAVE to disclose our neurology:
DVLA and changes to the rules for autistic drivers (4 March 2019) 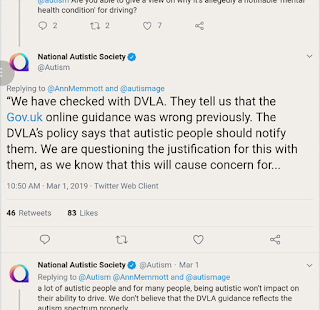 People have emailed them and received a response stating that you MUST disclose if you have an autism diagnosis (screenshot shared from a group with the person's permission): 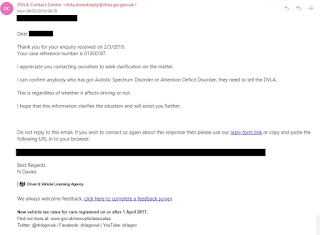 This new change from the DVLA means that failure to disclose can have a detrimental effect on the validity of your insurance, especially if you are involved in a traffic incident, and will lead to a fine of up to £1,000 and/or prosecution. The NAS, Ann and several others are currently in the process of seeking legal advice on this so this is a live, ongoing situation, and I will be updating as this process continues.

It's ridiculous. If an autistic person is not safe to drive, they don't pass the driving test. If they have medical issues such as epilepsy, that's a different matter, and there are very clear and specific rules about those. But autism alone? It should come down to their actual ability to drive, which is assessed constantly by driving instructors (who advise whether or not someone is ready and able to take their test) and then on whether they pass or fail the driving test. It's almost like THAT'S WHAT THE TEST IS THERE FOR.

These two items sum this up rather nicely: 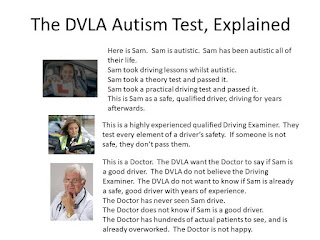 Competence, awareness, co-ordination, etc are all assessed in the current driving test, so if someone does not demonstrate a high enough standard of these, autistic OR NT, they would not pass the test.

This feels like a witch-hunt against the autistic population. There was no official announcement about it. No widespread notifying of the general population - which means a limited chance of anyone finding out about it had it not been for some eagle-eyed people who happened to be looking in the right place at the right time, and were able to spread the word.

I have already seen several people say that with this change in wording, they are planning to withdraw from being assessed for autism for fear that they may have their driving licence suspended/revoked. THAT is the reality of this. This screenshot has been shared with the permission of the blue commenter (I am the claret one): 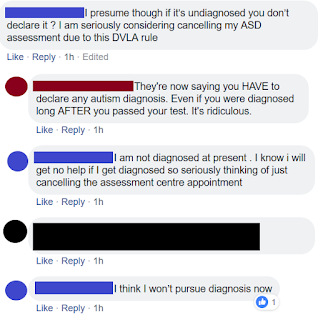 And what about those who have been driving for years, especially with a 100% clean licence and no insurance claims that have anything to do with their driving ability? (For the latter, I'm thinking of things like the time I had to talk to Motability's insurance branch after some inconsiderate person failed to park properly in Plymouth, leaving a scrape down the side of my car and the tail reflector smashed in - my car was properly parked and I was a good mile or so away at the time, absolutely nothing to do with me.) I passed my test when I was 18, according to the criteria at the time. I have never had so much as a parking ticket; I'm one of the safest drivers on the road. The same can be said for many other autistic folk.

Around 5.30/6pm today the NAS reported that the DVLA website has reverted to its previous wording: 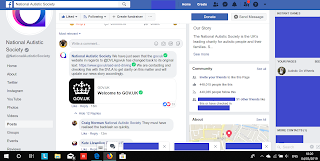 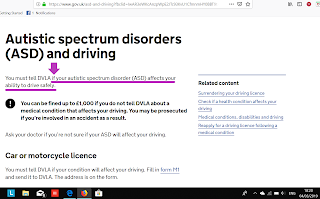 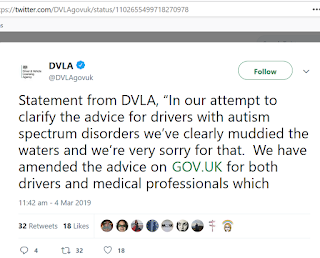 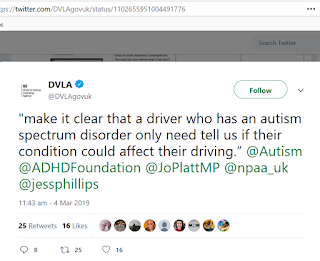 A massive, MASSIVE thank-you to everyone who put in the work over the last few days to get this clarified and sorted. You are all amazing and I am extremely grateful for all your efforts.

This is not over yet. There is a panel discussion on March 20th regarding this matter.But in the meantime, hold off on sending in your M1 form unless your autism does affect your driving.

Watch this space.
Posted by autistic-on-wheels at 21:13