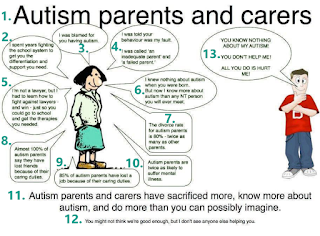 This post on a Facebook page for a local (not to me; further up-country) "Special Educational Needs" organisation popped up in my newsfeed this morning, in an autistics-and-allies Fb group I'm in. I don't know who originally created it because one of my friends encountered it today on Pinterest as well.

So consider this an open letter to the person who originally created this horrific, self-martyring, pity-party drivel. This is cruel, gaslighting, fearmongering, emotionally-abusive hate. If you are the creator, I hope you read what I and so many other autistic people are saying about it, and understand how harmful it is, and do better in future.

EVERYTHING about this is WRONG and here's why. The numbers below correspond to the numbers on the image above. As of about 5pm it's been removed from the page on which I saw it and a subsequent apology issued, with an assurance that it will not happen again. I certainly hope so! The autistic community will be watching closely.

I don't know what the original creator's intent or point was, but if it was to highlight any kind of systematic problem with support and service provision, it has utterly failed. This image is all about the appalling self-martyrdom I see among so many parents of autistic children, who make their child's struggles about how hard it is for them as parents, completely overlooking and ignoring how hard things are for the child. It exploits our struggles for the parent's desire for attention and ego-stroking. That is something that Needs. To. STOP.

It was good to see so many people (autistics and allies) pointing out how cruel, abusive and harmful the post was.

The layout, with the parent character facing towards the autistic-adult character, with no other character, sends a very clear visual message that the parent is directing their accusations at the autistic, which is completely inappropriate. There are no other figures in the image to which these statements could and should be directed, and so, consciously or unconsciously, that is the message being sent. That it is all the fault of the autistic person for being autistic, that we are a burden and too difficult, and ruin parents' lives. No. You don't get to do that to us. You don't get to gaslight us.

Layout and design matter. They communicate with the viewer.

This image is abusive, gaslighting, cruel, harmful and dangerous. It perpetuates the othering narrative of autistic people as a burden, people to be feared, hated and cast out, and as ungrateful brats who don't know what's good for us.

It is victim-blaming and that is NOT OK. It is NOT ACCEPTABLE to blame an autistic person for the difficulties they face and it is NOT ACCEPTABLE to make the autistic person out as the villain when the fault lies with a lack of support and service provision, with those restricting finances to fund those resources. You need to place the responsibility of shortfall with them.

You know who the parent character here reminds me of? Vernon and Petunia Dursley in the Harry Potter books. At some point I will likely edit this post with some direct quotes but not right now. I know that I am very lucky to have not had parents blame me for simply being autistic and for being a burden on them or making their life oh-so-hard, or tell me how grateful I should be because of everything they've ever done for me and I should be on my knees in overwhelming thanks just for being given the basic necessities of life, but I have encountered a disturbing number of autistics for whom this is their experience. It's horrific, and has left them with serious long-term mental-health problems. THAT is why things like this are so dangerous and cause so much harm. THAT is why autistics continue to speak out against things like this.

There are far, FAR better ways to talk about us and the struggles that can ensue from systemic shortfalls and damaging societal narratives than this self-serving, guilt-tripping drivel.

Finally, regarding the statistics given for the friend/job loss and mental-illness comments (we've already established that the divorce figure is utter rubbish), from where are these figures sourced? If you're including specific numbers, you need to give the source. Anyone can write a number and claim it's a statistic, but it's meaningless if they're just made up, and actively dangerous if they're being used to perpetuate fear and harm. What are you going to do with those figures, creator of this post? Stick them on the side of a big red bus and drive it around the country claiming it as fact?
Posted by autistic-on-wheels at 22:55