Locked In For Autism update 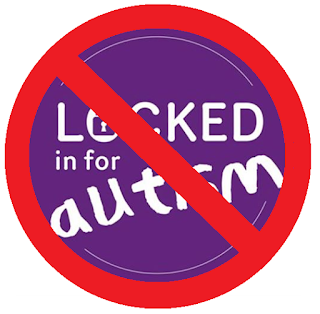 WOW. What a hectic few days.

On Thursday/Friday I emailed several appropriate MPs about the Locked In campaign, a man at Tesco who appears to be fairly high up, Andy Bailey (the man quoted in the Hackney Gazette article in my previous post) and a woman at Third Sector Excellence Awards because Caudwell has been nominated for (an) award(s).

I have not yet heard back from the MPs I emailed (Diane Abbott as her constituency is Hackney; Penny Mordaunt as she's Minister of State of Disabled People; and Marie Rimmer as she is the Shadow Minister for Disabled People). Andy Bailey replied on Thursday saying he was out of the office until Monday (today) and to call him on the number provided; I'm not great on the phone and so I replied explaining that I have difficulties on the phone because I am autistic so could we please keep the correspondence to email. I have yet to receive a reply. If I haven't heard anything by lunchtime tomorrow I'm going to email again. I also have not heard back from the Third Secot woman; I did get an automated reply saying that she was away at the awards judging and so had limited access to email and that if it was urgent, to contact someone else in the organisation (this other person's email was provided). I emailed the alternative, because if the judging is currently occurring, this is an urgent matter due to the involvement of Caudwell. Again, I have yet to hear anything back.

I received the following email from Tesco customer service on Friday:

Thank you for taking the time to email Dave Lewis, our Chief Executive.

I’ve asked one of the team to look into this in more detail for you. Due to unexpected contact volumes we are taking a little longer to respond than we would have hoped however, one of the team will be in touch as soon as they can.

Thank you for your patience until then.

By "unexpected contact volumes" I suspect they mean "many, many emails from autistic people flooding in since yesterday"! I know I'm far from the only one who emailed them.

I did not expect to hear anything for at least a few days. After all, it's a big company and they had a lot of anti-Locked In emails to trawl through.

This afternoon at 4:22pm I received the following email from Tesco: 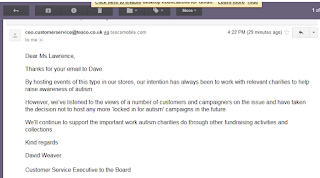 I nearly fainted! I had to re-read it several times before it sank in. This is MASSIVE. It's a real victory. It shows that Tesco is listening to autistic voices and that we can make a difference. This is real people power - the autistic community has come together and clearly demonstrated that we matter, that we can instigate change, that we can get better, more appropriate representation, that we can get organisations to listen to and respect us, that we can be viewed as equals.

I'm amazed and exhilarated at such a swift response and decision. I suspect that some of the reasoning behind that is that a lot of people have contacted Tesco, particularly via Twitter on the @NotLockedIn account, to express their displeasure at and disagreement with their support of Locked In and to inform Tesco that as long as they continued to support Locked In, they would not be shopping at Tesco, and nor would their friends and family. The threat of losing customers and money is a pretty big incentive, especially on this scale! I hope that it is also because Tesco has actually listened to autistic voices and realised that Locked In is a harmful campaign. The email from them seems positive and I have replied, informing them that I am happy to work with them in ensuring they support appropriate autism organisations and causes in the future. I also asked for clarification as it is unclear whether the Hackney and Birmingham events will still go ahead.

So this evening we are celebrating this victory. It was well-fought and well-organised and I want to thank everyone who lent support, be it emailing, tweeting, sharing things on Facebook, signing the petition to Tesco, or anything else. You have been fantastic.

However, this was one battle, and it was the relatively easy one. Surprisingly easy, if I'm honest! Now we take the fight to Caudwell itself. It may be easier than we feared, though, as following Tesco's withdrawal of support they have suspended Locked In. Though it's suspended rather than terminated, so it's not as good as it could be, although it's better than we hoped at this stage (the NotLockedIn campaign has been going less than a week). The ultimate goal is to completely terminate this stunt, as well as any other stunts that are similar, either in method or theory, because they are harmful to autistics. Thanks to my fellow campaigner Sarah-Jayne for the screen grabs! 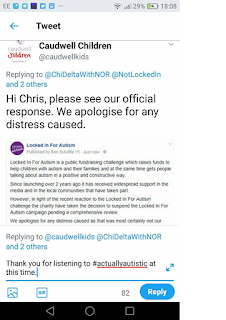 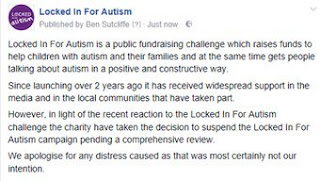 I'm going to analyse and critique this response:

Going back to the point about "recent reaction", I wish now to draw your attention to this, from November 2016:

My issues:
The November 2016 post clearly demonstrates that Caudwell's words were empty then. They are going to have to do a LOT to show that things are different, and at this moment I have no reason to believe that their latest placatory attempt will be any different.

[22:45 edit: It's very interesting and revealing to note that Caudwell only suspended Locked In after Tesco pulled out.]

NotLockedIn is continuing. We have won the initial part with Tesco, but now we move on to Caudwell itself. Watch this space and please continue helping the campaign!
Posted by autistic-on-wheels at 22:12

Email ThisBlogThis!Share to TwitterShare to FacebookShare to Pinterest
Labels: autism awareness stunts, autistic community, Caudwell Children, Locked In For Autism, Not Locked In